Many pilgrims start the Camino de Santiago in Roncesvalles. Many of those who stay in this town, attend the mass of pilgrims by night and receive the blessing before the trip. To Espinal, before passing through Burguete, profile is plain and AC wooded sections with extensive meadows. Paths of forest, we reach the high of Mezkiritz (922 m) where we crossed the N135. On the edge of the road there is a small statue of our Lady of Roncesvalles.

The stage between Roncesvalles and Pamplona crosses the beautiful Arga valley, which is full of pine forests and beech forests. Beside these great forests, the pilgrim will cross pastures, wide meadows in which sheep, goats or cows will be grazing.

This is a stage with many changes of gradient, both up and down. The route follows dirt paths and trails, but always runs more or less parallel to the N-135, a road that serves as point of reference.

Together with the routes that run through forests and more or less isolated meadowland, there are others that cross numerous hamlets, small villages in which traditional Basque houses the houses abound.

For those pilgrims who have chosen Roncesvalles as their starting point, this first stage with its great natural beauty will prove to be unforgettable.. We suggest that you should make for Zubiri as the end of your first day, but in case you do not find accommodation or want to walk a few more kilometers, Larrasoaña can be a good alternative, since it is approximately one hour's walk away.

We left Roncesvalles at the Roldán cross and struck out along a dirt track that runs close to the N-135 between beech and oak forests. We then cross the town of Berruguete / Auritz, one of many "road" villages of the Camino, that is, one that is ‘stretched out’ along the pilgrimage route, rather than being one where the houses being bunched together.

We leave Auritz and continue towards Espinal / Aurizberri. The road crosses this settlement by its main street, from where we will turn off onto a path that runs through forests. Here the pilgrims will begin the ascent that will take them to the top of Mezkiritz.

On this beautiful summit there is a fine statue of the Virgin of Roncesvalles. From there, the pilgrim descends parallel to the road, passing masses of beech trees and a ‘tunnel’ of boxwood trees.

We come down a small slope and arrive at Bizkarreta / Gerendiain, town with two districts that are crossed by ‘the Way.’ We leave this town by a path that always runs parallel to the main road, from which we later take a somewhat broader dirt track through which ends up in Lintzoáin.

In Lintzoáin, next to a fronton begins the ascent that through Mount Arrola, with its pines, oaks and birches, will lead us to the top of Erro.

The heights of the Erro, is distinguished by its numerous modern aerials. The pilgrim here faces an unpopulated area, which can be complicated if there is an excess of rain or snow. The descent, close to the general road, runs alongside the remains of the Venta del Puerto, then plunges down along a path through Agorreta to finally land up among pine groves in the town of Zubiri. 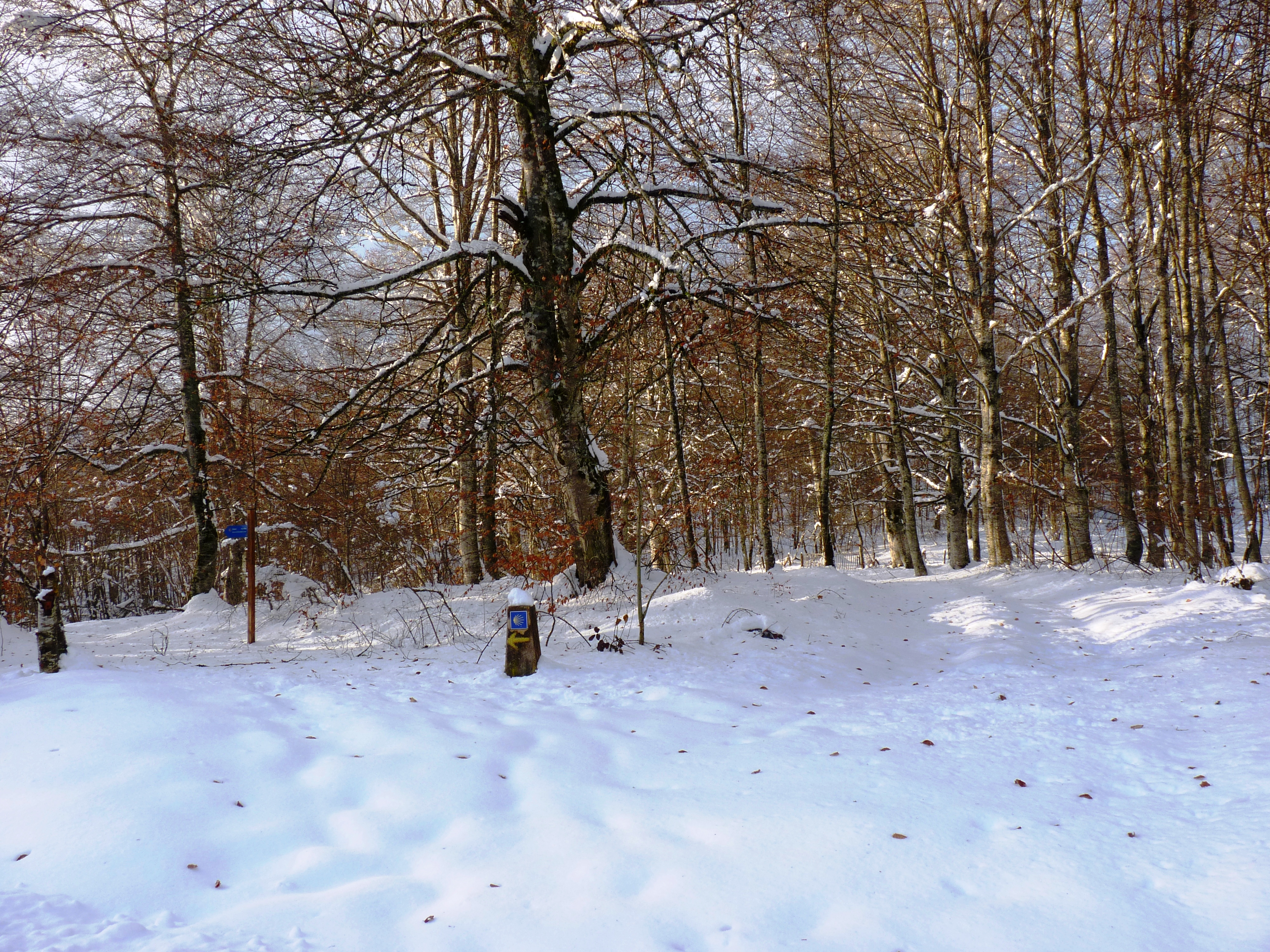 Always by forest roads and a section of concrete, we come to Zubiri and in 1 half h to Larrasoaña. The hostel is 300 m across the bridge to the right and then turn left to the Centre of the village.