In the thirteenth century the cathedral was a symbol of a city, but in the case of Leon it was also the symbol of a Kingdom. We should bear this in mind when we gaze upon the magnificent and ambitious dream that led to the construction of a framework that holds the largest set of stained-glass windows ever conceived. 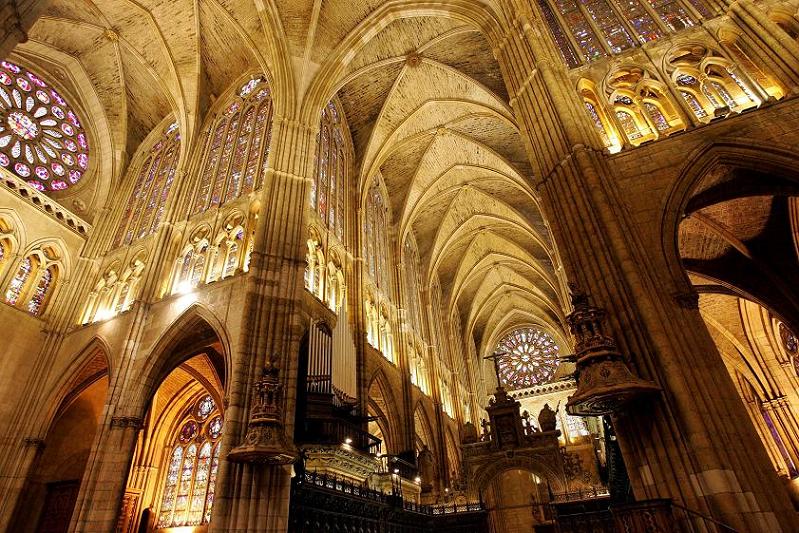 León Cathedral has a frame which contains 130 windows, together with three large rose windows, a number which is only surpassed by the 176 windows of Chartres cathedral, but the windows of Chartres cover a much smaller surface area. The windows of León reflect both scenes of nature and aspects of the supernatural and the constructors knew enough about optical science to be able achieve light effects and, through them, generate or manipulate the architectural space

The windows were the responsibility of a small army of glass smiths and blacksmiths who, while the church itself was being constructed, were designing, decorating and cutting the glass panels and then joining them with molten lead. From the late thirteenth century the architectural framework was prepared for the windows in the major chapels and, from the early fourteenth century, in the principal and adjoining naves.

Among those responsible for these windows it is quite clear who must have been painters, as opposed to those who drew cartoons or preliminary sketches. These men painted directly onto the glass already fixed in the lead and knew how to make the colour radiant when suffused with light.

Over the centuries most of the original windows have been lost, leaving only some panels, many of them mutilated or badly damaged. Most of the stained- glass remaining dates from the XIV, XV and XVI centuries; the rest dating from the extensive restoration that was undertaken in the X1X century.

We can begin by examining the series of chapels. These consist of low windows in the chapels of the apse. Here very small figures are used to illustrate historical or biblical scenes, scenes from the lives of the saints or even secular scenes. The iconography of the apse is the most important of the cathedral and one which, on the one hand emphasizes the most popular devotions of Leon and, on the other, the importance of the Camino de Santiago in the city’s history. Among such scenes, one represents St. James arriving by sea in Galicia, while in one of the rose-windows, a group of pilgrims can be seen arriving in Compostela.

Working our way round from the apse, we can see the higher windows which date from the XIV, XV and XVI centuries. Here there are 31 windows contained within three roses and should be ‘read’ from top to bottom and from left to right.

In the other cycles there are far fewer ancient panels. Such is the case with the lower series which consist of 10 windows along the principal and smaller naves. These were restored between 1895 and 1901, although many roses have incorporated the original windows of the fourteenth century. There are another 75 windows arranged in trefoil at medium height around the nave, the transept and the apse- all of them the subject of restoration work from the XV to XIX centuries. Finally, mention must be made of the three large rose-windows on the west, north and south walls. The one on the west wall dates from the XIX century, that of the north wall combines modern glass with others dating from the XIV and XV centuries, while the southern one is entirely modern.