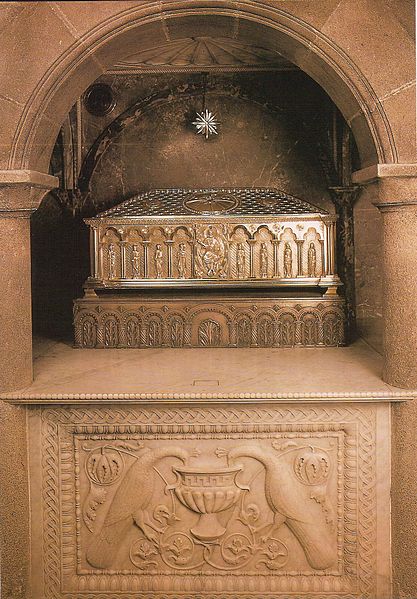 All the texts coincide in indicating that the transfer by land was made by carriage and inside the aforementioned "Arca Marmórica". When, finally, the ideal place was found two of Santiago's disciples -Teodoro and Athanasius- remained there as guardians of the tomb until they themselves died, later being buried alongside the saint. Centuries later, in the year 813, the discovery of that tomb would give rise to the first basilica of Santiago being built and to the founding of the town of Compostela.

Apart from the legend of Santiago, today we shall concern ourselves with the relics of the Apostle, his tomb, the old "Arca Marmórica", and his presence in the current cathedral of Santiago. We know that the two pre-Romanesque churches and basilicas, as well as the Romanesque basilica, whose structure is largely preserved today, gave the tomb a central role under its main altar, because the whole edifice was in some ways built around that tomb.

However, the continuous invasions of English pirates throughout 16th century, especially that of the famous Francis Drake, led to the archbishop Juan de Sanclemente deciding in 1589 to hide the relics of Santiago, by way of protecting them. The sources say they were buried in an area near the main chapel, but the truth is that, little by little, the place was forgotten until it disappeared completely from the collective memory.. For centuries the pilgrims and faithful who visited the cathedral had no place to pray to Santiago!

Finally, in 1879 the then archbishop of Santiago, Cardinal Miguel Payá e Rico, set in motion a series of excavations in order to recover the lost relics. During one of these excavations an urn containing bones was found, which were examined and studied by the University of Santiago and by the Holy See. The results of the examinations and the study of the archaeological remains of the site of the excavation allowed the relics to be authenticated. In 1884, Pope Leo XII confirmed the authentification through the bull ‘Omnipotens’, which still lends its support to the cult of the tomb and its remains. They can still be visited in the crypt under the main altar of the cathedral.

Thus, the current crypt and tomb are the result of the reforms carried out at the end of the 19th century. There is a chiselled silver urn of Romanesque style in the center of which is a relief of Christ in Majesty, arranged in a mandorla or almond shape and surrounded by the Tetramorfos - symbols of the Evangelists - and the Apostles. The design and elaboration of this work was the work of Jose Losada and can be dated around 1886.